More of a tourist than a traveller, I’m standing on an outcropping of volcanic rock in the Caribbean, scratching away at my archipelago of bug bites. My guide Calvin, a relaxed fellow with dark skin and blue eyes, notices my agitation and stoops to pluck leaves from a nearby plant used as a local medicine for wounds. He shows me how to apply sap from the leaf’s stem. Using my other bites as a control group, I wait to see if the itching stops in the applied area. It seems to work. 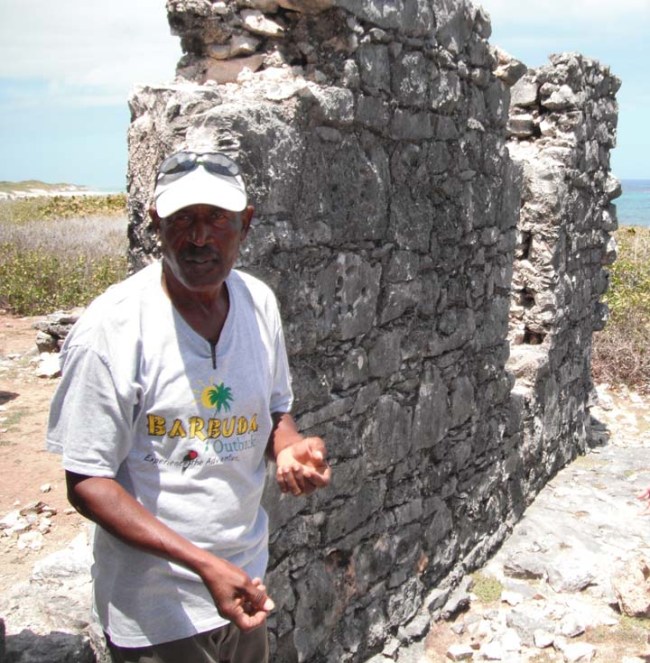 Barbuda – often confused with or mispronounced as “Bermuda” or “Barbados” – is a small, flat coral island in the Caribbean, only 17 degrees from the equator. It is ruled by neighbouring Antigua, 29 miles south, a nation with a governor general and a constitutional monarchy led by the Queen. Most of the 1,800 inhabitants of Barbuda are descendents of the slave trade.

Barbuda’s dusty roads and dilapidated buildings make the island appear to be a ramshackle place, although it’s blessed with one of the longest stretches of pristine beach in the Caribbean, at 17 miles in length. Calvin says life on Barbuda is casual and I take his friendly, laid-back demeanour as evidence. He says he not only works as a tour guide but also as the island’s minister of roads; I’m not sure if he’s joking, but he adds that Barbuda’s residents take on multiple jobs to serve their own needs. If there’s something you can’t do and need done surely there’s someone you know who can and will. Barbudans will spend years building their own homes, adding this or that when money comes along. When their concrete, hurricane-hardened homes are finished – on property they own – they have something to pass on to their children, mortgage free.

There are no supermarkets, Calvin’s brother Jala tells me, just “supermake-its” where Barbudans trade goods and services among themselves. There is something to be said for subsistence living; this is no debt-driven economy with wageslaves punching the clock to service their credit cards and home mortgages.

Islands are often described variously as hothouses, hotbeds or laboratories of natural selection, with flora and fauna found nowhere else. Wildlife is sped up in geological time on islands, with speciation and extinction playing leapfrog. But it’s not just biological evolution that’s accelerated. From Ganges Harbour to Reykjavík, new ideas and new ways of life can catch hold on islands in ways that are improbable or impossible elsewhere.

As a 22-year old naturalist aboard the exploratory ship, the Beagle, Charles Darwin spent 19 days on the Galápagos Islands in 1835. His main interest was the geology of the volcanic island, but his curious mind leapt from lava flows to the colourful range of birds across the island chain. Each island had its own unique avian species and this discovery seeded the young naturalist’s mind with the initial evidence for the theory of evolution through natural selection.

Darwin would have appreciated the new studies in “island biogeography.” In this context, an island “is any area of suitable habitat surrounded by an expanse of unsuitable habitat,” according to ecologist Robert MacArthur of Princeton and biologist E. O. Wilson of Harvard University. This includes not just actual islands, but untraditional islands “such as the peaks of mountains, isolated springs in the desert or expanses of grassland surrounded by highways or housing tracts.”

The ultimate piece of biogeography is Earth itself. The most worthwhile thing to come out of the American-manned space program wasn’t moon rocks; it was the first iconic photograph of planet Earth from thousands of miles away. Homo sapiens had its first collective ‘aha’ moment not looking out to the distant stars, but rather looking back from the perspective of space, on its island home floating in blackness.

Just as islands, in the traditional sense, are evolutionary toyshops, their distant lure has spurred human beings into astounding feats of invention. For thousands of years, trained sailors from Micronesia could literally look at ocean waves and judge the direction of an island from up to 40 miles away by how its unseen presence affected wave motions.

Natural selection is value-neutral however, making “progress” a tricky word. Just as biological evolution has produced monarch butterflies and tapeworms, cultural evolution has resulted in both choral music and napalm. The lure that drew sailors of the Neolithic into the Pacific infected the great naval powers during the Age of Exploration. Four mildly to highly addictive substances – coffee, chocolate, sugar and tobacco – drove sailors, soldiers, slavers, privateers and pirates across the Atlantic like a plague of locusts. Britain, France, Portugal, the Netherlands and Spain carved out trade routes across the waters, using millions of African slaves as both tradable commodity and the raw labour to extract tropical wealth – all the while warring among themselves for global dominance.

The islands of the Caribbean became gears in the terrible machinery of slaving, trade and conquest. “The distortion and dehumanizing of human institutions and human lives caused by crack cocaine today is nothing compared with what the European desire for sugar did in the seventeenth and eighteenth centuries,” wrote Terence McKenna in his 1992 book Food of the Gods. A museum in Antigua reveals the mind-numbing record of slavery in the Caribbean, with Africans stacked like cordwood on slaving vessels and traded like livestock in open markets. Abolitionists succeeded in officially banning slavery throughout the Old and New World by the 19th century. But it was the island of Haiti that led the way in 1804, with a slave revolt leading to the world’s first black republic.

In the past half-century, the wealthy citizens of industrialized democracies have found a more sophisticated use for the islands of the Caribbean: as places to secretly stash their money. A recent conservative estimate puts the money held in offshore tax havens at an astounding $21 trillion US; approximately the size of the Japanese and US economies combined.

The Financial Secrecy Index rates tax havens according to secretiveness, with the highest class being the Maldives and Nauru. The second highest class includes Bermuda, Vanuatu, Grenada, the Marshall Islands – and surprise, surprise – Antigua and Barbuda. Through these unregulated accounts an estimated $1 trillion flows as the annual cross-border flow of the proceeds of financial crimes, according to the International Consortium of Investigative Journalists.

Yet cultural evolutionary novelty can go in all kinds of directions. Several years ago, an island in the Northern Atlantic became the focus of a big money scam of more recent vintage: the international fad in deregulated banking and zombie funds. When Iceland got caught up in the madness, local herring fishermen suddenly became newly minted bankers, while homeowners mistook their homes for ATMs rather than ticking time bombs. It all unravelled in 2008, bringing people into the streets banging pots and pans, demanding accountability from their leaders.

Relative to the size of its economy, Iceland’s banking collapse was the largest experienced by any nation in economic history. But the Icelanders were in no mood to take a post-meltdown economic prescription from the sources that had sickened them in the first place. Icelanders nationalized one bank, put three others into receivership and instituted capital controls. Told they could no longer expect the same standard of education and health care that their parents had taken for granted, Iceland went it alone and managed their own affairs. Most notably, authorities indicted Icelandic banker Sigurdur “Siggi” Einarsson, head of the Kaupthing bank, along with nine senior executives. Bailouts, nei. Jail-ins, ja.

According to Wikipedia, the Icelandic Financial Crisis is commonly referred to have officially ended August 31, 2011. In other words, in spite of a severe recession, the sky did not fall over Iceland’s geothermal springs and brightly painted homes. (In contrast, a handful of nations in the Eurozone have reluctantly swallowed their IMF/ECB/EC austerity medicine after massive street protests, with shattered economies and record unemployment to show for it.)

Meanwhile, just for fun, in 2010 Icelanders elected a comedian as mayor of Reykjavik.

The defeat of the centre-right municipal government of Hanna Birna Kristjánsdóttir by Jón Gnarr and his Best Party was widely regarded as punishment of “serious” politicians for their role in Iceland’s 2008-2011 credit crisis. Other parties were secretly corrupt, said Gnarr, so his party promised to be openly corrupt, although he also promised a drug-free Althing (parliament) by 2020. After his victory, Gnarr announced he would refuse to form a coalition government with anyone who had not watched the HBO series The Wire.

The Icelandic people take their humour dark. The 2010 eruption of the nation’s tongue-twisting volcano, Eyjafjallajökull, momentarily darkened North Atlantic skies and grounded transatlantic flights, inspiring some local wag to note, “It was the last wish of the Icelandic economy that its ashes be spread over Europe.” Yet post-meltdown Iceland has done better than other sovereign nations by rejecting the bloodletting procedures of technocratic quacks. The rejection was a novel idea implemented on an island, with all the evolutionary practicality of the specialized beaks on Darwin’s finches.

In 2006, I took a floatplane to Salt Spring Island to hear former US Assistant Secretary of Housing Catherine Austin Fitts address the Salt Spring Monetary Fund, a group of residents rethinking how money works in their community. (The island even has an ATM that issues Salt Spring Dollars in exchange for regular currency.)

The brilliant Fitts is an enthusiast for alternative currencies and fostering communal nuclei for new ways of thinking and living. In a newsletter from her online forum for financial advice, solari.com, she writes about one of her partners, an entrepreneur who grew up on a small island. “He once explained why small islands produce a much higher percentage of people who are good at starting and building successful businesses. He said that it was because someone who grows up on a small island sees how everything is connected… He said that America is just a very big island, but most Americans do not know this – nor do they understand that the planet is also just an even bigger island.”

“The folks who feel that their biggest problem is their financial equity – falling yields on their investment portfolios – have yet to see that they cannot enjoy capital gains unless their living equity is preserved. That is, our neighbourhoods and children need to be kept safe, and we need to understand that the very things that will contribute to their safety – an increase in real human productivity, honest feedback systems and a restoration of personal accountability – will also lead to huge increases in collective investment capital in the economy.

The folks who feel that their greatest problem is living equity – that they and their children are not safe and our environment is being destroyed, or that we are committing genocide in other parts of the world (or down the block) – have yet to see what the real issue is. We cannot achieve personal safety when yields for both retail and institutional investors are dependent on profits from organized crime, trickery of the investing public and government guarantees that promote unproductive investment and personal behaviour. Only when we achieve real economic growth based upon concrete increases in productivity, accounted for and disclosed on an honest basis, can we be both safe and wealthy.”

In other ways, one route out of our collective mess – perhaps the only route – is to start thinking like people with some inkling about their limits both geographically and communally. Islanders.